Before I even became pregnant my husband, Nathan, and I wanted a non-medicated, natural, home birth, but I did not want to make ‘a mess’ in my bed. The thought of having to clean everything up after I delivered the baby help us make the decision to choose a midwife who practiced at a hospital. April was perfect . . . I know from the moment we meet in the office that I did not need to look any further.

I had a perfect pregnancy until I went to my 31 week appointment where April said that I could have a home birth with her. I thought “things happen for a reason” so we did not hesitate to stay with April. We began planning for our home birth including renting a birthing tub. I am a planner so we had everything ordered within 2 weeks and set-up in the living room 1 week before my due date. I looked forward each week for my check up with April. I no longer had to travel all the way to Henderson from my home in North Las Vegas. April really helped with my nutrition since she could see what was in my fridge and I could not lie anymore about what I was eating!!!

By my 39th week I was ready for Jack to be born; I was really uncomfortable. Nathan was a trooper going on walks with me in January. Nothing was working, I was only dilated 1 cm and no contractions, not even Braxton Hicks. April finally said that if I wanted to I could visit with the acupuncturist, Sharron Roth, to see if she could get things going naturally. After 2 visits still nothing. I was cooking some lunch on Sunday Feb 3rd, and my water broke. Continuing with my fear of making a mess in my house, I could only think “thank goodness I was on the tile floor!” I called April very excited that things were finally moving, but still not contractions. April came over to check on me and the baby. We decided to try another visit to Sharron Roth on Monday to see if we could get the contractions going. April came back on Monday to check on me and the baby, still no contractions. I was starting to worry that I was going to end up in the hospital to be induced. April kept reassuring me that everything would be OK. It felt like groundhogs day . . . Tuesday April came by to visit, me and the baby were still doing well medically, but I was ready for this to be over and hold Jack in my arms. 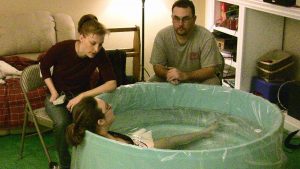 I thought the time would never come that I would have some contractions, but it did . . . Tuesday night. I never thought I would be ecstatic to feel contractions (don’t worry the excitement was short lived). By 7:30 pm the contractions were strong enough that April offered to come by to check me and the baby. When she got here at about 9:30 pm I thought it would only be a matter of hours that Jack would be here because I felt like I needed to push. After a while on the toilet and then in the tub, I just was not progressing. April checked me and I was only 3 to 4 cm but the baby’s heartbeat was great. That is when I lost it . . . . I starting saying things like “take me to the hospital”, “I couldn’t do this without drugs”, and begging my husband. April was so calm – she suggested that I just rest and that she should check me in a bit. How could I rest? The contractions were strong, long, and frequent. I did not want to move from where I was so my husband brought down a comforter and I laid on the living room floor. I noticed Nathan was gone, but April was there helping me through each contractions. After about 1 ¾ hours April checked me again and she said I was 6 cm. Even with the support and encouragement of April I still was begging Nathan to go to the hospital again. April explained that with as quickly as I progressed 2 to 3 cm that by the time we got dressed drove to the hospital got checked, and the anesthesiologist came, it would be too late for the drugs. Once she said that I was like “OK, if I can’t get the drugs I’ll just stay home.” She had me move back into the tub, but I insisted they lay down towels because I did not want to get the carpet dirty (I know – the things I worry about!!). The tub water was a relief and that is realized our dog Carla was lying on the couch next to the tub waiting patiently for Jack to arrive. I can’t remember how long it was or even when Allison, April’s assistant, arrived.

April checked me at 3:00 am and I was 9 ½ cm, but I had a slight lip left on my cervix. She had me push a few times while she pulled the lip out of the way. Needless to say, not the most comfortable feeling but I wanted to get Jack out. Nathan got into the tub with me holding me up from behind while I pushed. I pushed for about 1 hour and new that something was not quite right. April had me flip on to all fours in the tub to push and kept coaching me to get Jack out. We had plans for Nathan to catch Jack, but April needed to get Jack out. I remember feeling Jack’s head and feeling so accomplished, it really was almost over. April caught Jack and she was right, Jack had the cord wrapped around his neck. She did not say anything so not to alarm us, but she did give Jack some oxygen. April was doing what she is trained to do.

It was surreal to hold my baby boy and even more surreal to know that I did it, really did it. No drugs, no hospital, no tearing; I felt like superwoman. I know April and Alison were still there, but they just did there thing around us. Jack weighted in at 8 lbs 12 oz and 19 ½ inches long, he was perfect. After April checked out me and Jack, see was filling out the paperwork and asked if anyone noticed what time he was born. We were all so excited that Jack finally arrived; no one looked at the clock. Since Nathan was recording the birth, we just rewound the video camera and found that he was born at 4:04 am. 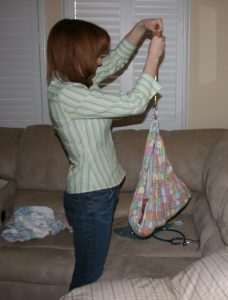 I have to say the best thing about having our baby with April at home was that I took a shower and was in my own bed, with my baby and husband by 7:30 am. While I was getting ready for bed April and Allison cleaned up “the mess” that I was so scared of! I know that I could not have done it without April and Alison; I owe them a debt of gratitude for making my birthing dream come true.

April was not only a great support for me, but also my husband. A few days after Jack’s birth I was going through some papers left on the kitchen island. I found a notebook where Nathan wrote “Is this normal?” and “Is she OK?” April was not only coaching me through Jack’s birth, but Nathan as well. I had no idea that this was going on until I found the notebook. 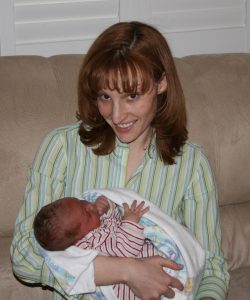